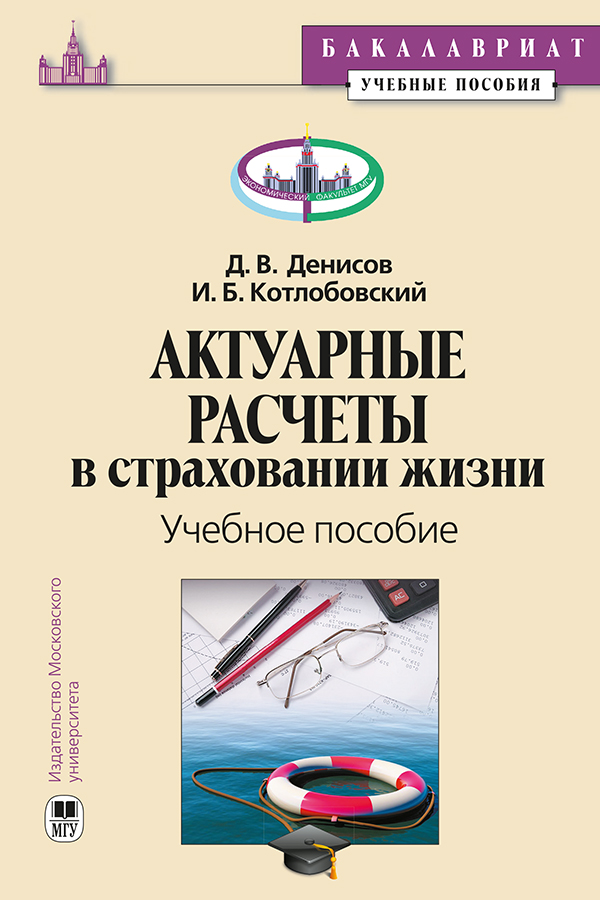 The manual contains a consistent and systematic account of actuarial practice proven methods of calculation of tariff rates, life insurance reserves. The methods of forming net and gross premiums, changes in the reserve during the operation of the insurance policy for the various types of long-term insurance are discussed in detail.The book is based on the part of lecture course and seminar materials that the authors have been delivering for a few years at the Faculty of Economics of Lomonosov Moscow State University at the elective course "Actuarial methods". The uniqueness of the publication and its main advantage is that in additional theoretical material it provides solutions to many problems of actuarial mathematics.

The book is designed for the students of economic and mathematical departments of universities and individuals using actuarial calculations in their work. 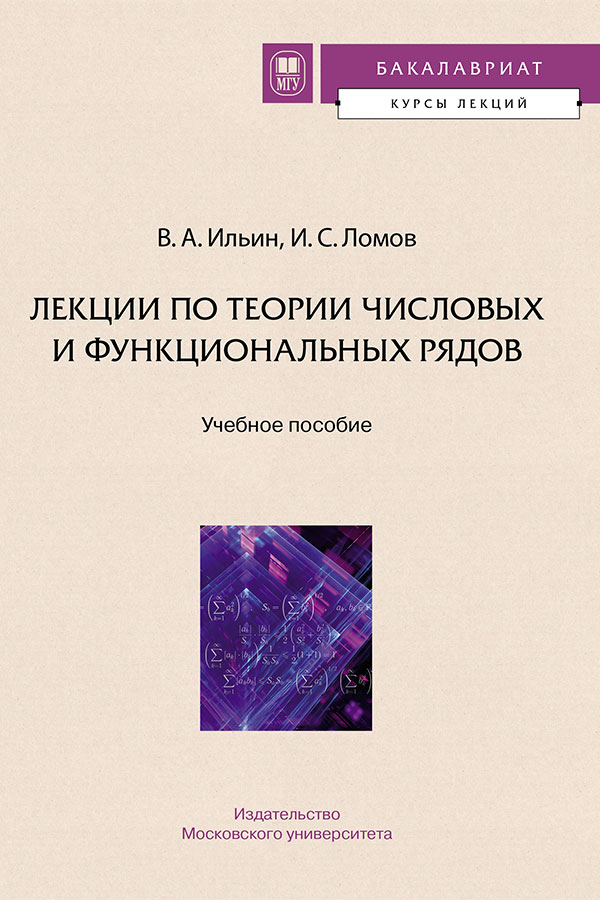 >Lectures on the Theory of Numerical and Functional Series
Ilin Vladimir A; Lomov Igor S. ;

The book is intended for bachelors which profoundly study mathematics. 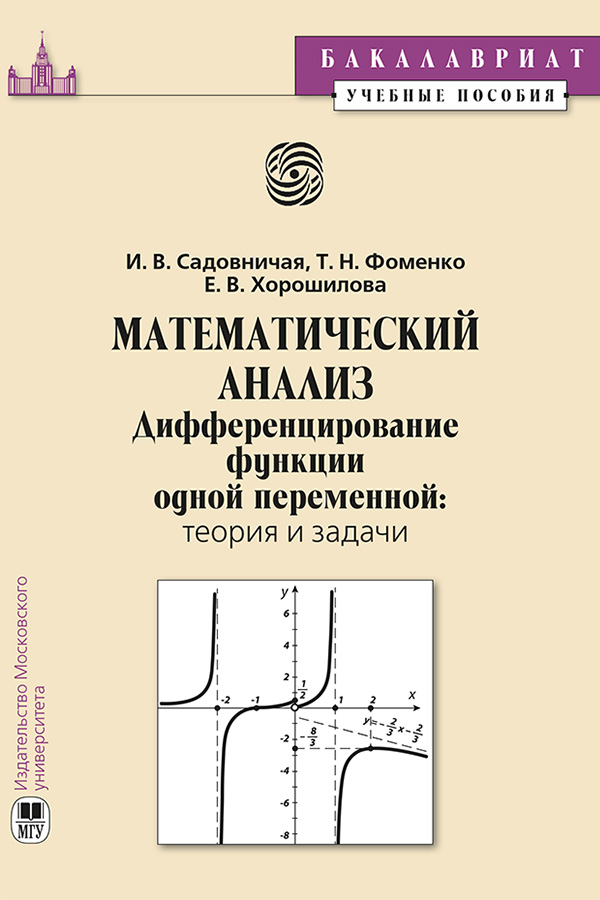 The publication is devoted to theoretical and practical aspects of the subject of ‘Differentiation of One-Variable Function’, which is studied in the first and partially second terms in the first-year-course of mathematical analysis. It is based on the authors’ experience of reading lectures and conducting practical classes at the faculty of computational mathematics and cybernetics, Moscow State University.

The manual contains three chapters, the first of which is devoted to general theoretical aspects. This chapter contains basic concepts and facts related to the differentiation of functions, as well as some examples of the use of derivatives for solving various problems. The second chapter outlines the general scheme for investigating the function and constructing its graph, and gives recommendations on how to solve problems on finding the maximum (minimum) value of a function on a given set. It also shows some examples of the study of functions and the construction of their graphs, as well as an example of solving an applied problem for finding the maximum value of a function. The third chapter contains tasks (with solutions) for all the sections under consideration. Some of them are analyzed in the manual text while the others are designed to be solved on one’s own. For the second group of tasks, the answers and solutions are given at the end of the book in the corresponding section. The purpose of this manual is to help the student to learn the theoretical part and acquire practical skills in solving problems on the subject of ‘Differentiating a one-variable function’.

For university students. The publication can be useful for teachers who give lectures and conduct practical classes in mathematical analysis and all those who wish to study these subjects on their own or learn more about them. 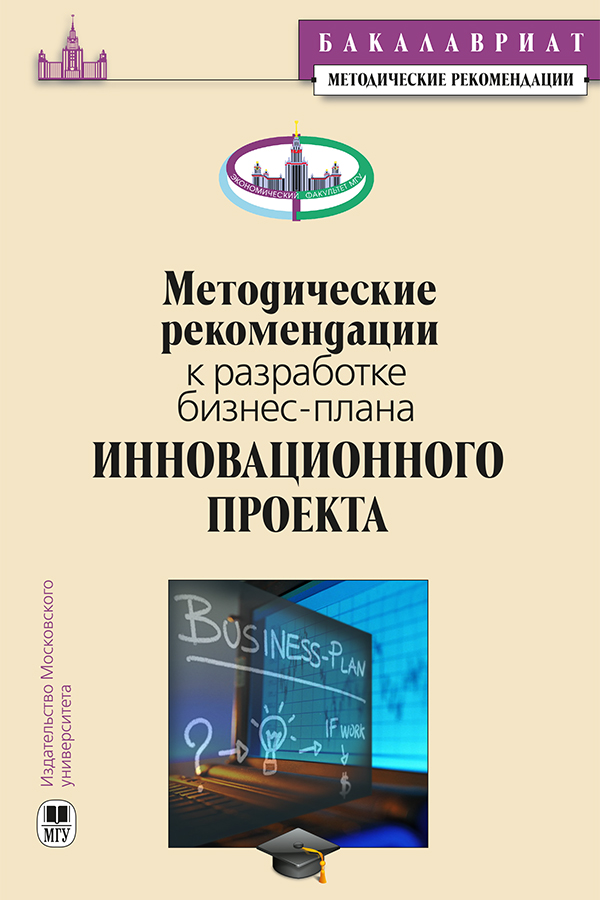 >Methodical Recommendations for Developing a Business Plan for an Innovative Project
Ivashchenko N.P.;

The aim of this manual to deepen and consolidate students’ knowledge gained during their lectures and seminar classes and to develop their creative and analytical skills on the subject of the ‘Economics of Innovation’ discipline. Given that the project is to be done by graduate students and to be of a general nature, its successful implementation also requires mobilization of the previous knowledge and experience, which was gained by studying other disciplines, too.

For MSU students studying at seminars and on their own in the ‘Economics of Innovation’ course. 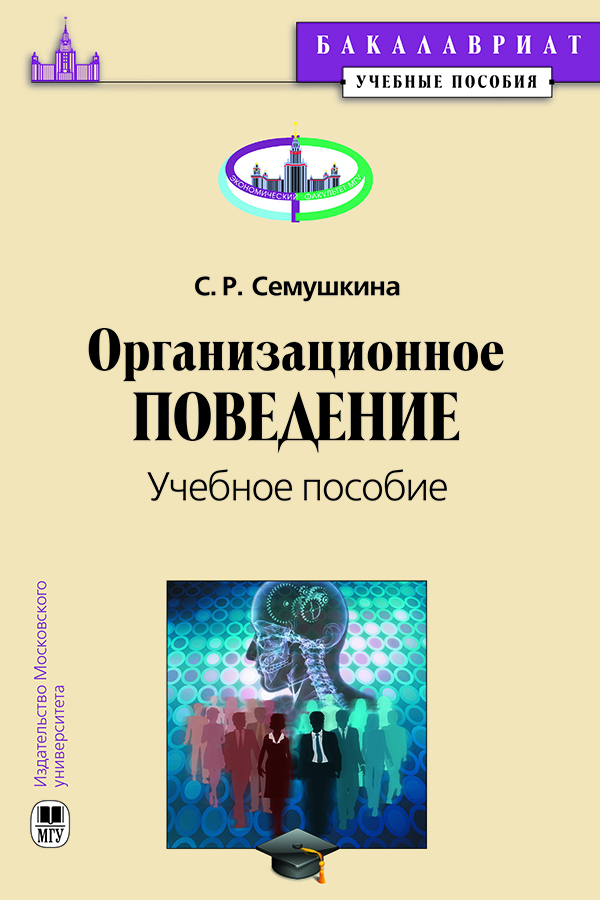 The textbook analyzes problems facing organizations and employees in the 21st century. In addition to the fundamentals of organizational behavior, it examines the current state of rapidly developing organizations that face uncertainty, constant change and the impact of high technologies. It presents various models, technologies and tools of business changes aimed at radical organizational transformations. The manual contains a brief overview of the theoretical material, practical assignments and examples of case studies with a breakdown by topic, materials for students’ independent work and homework, recommendations for writing term and diploma papers. The manual is intended for students of economic specialties. 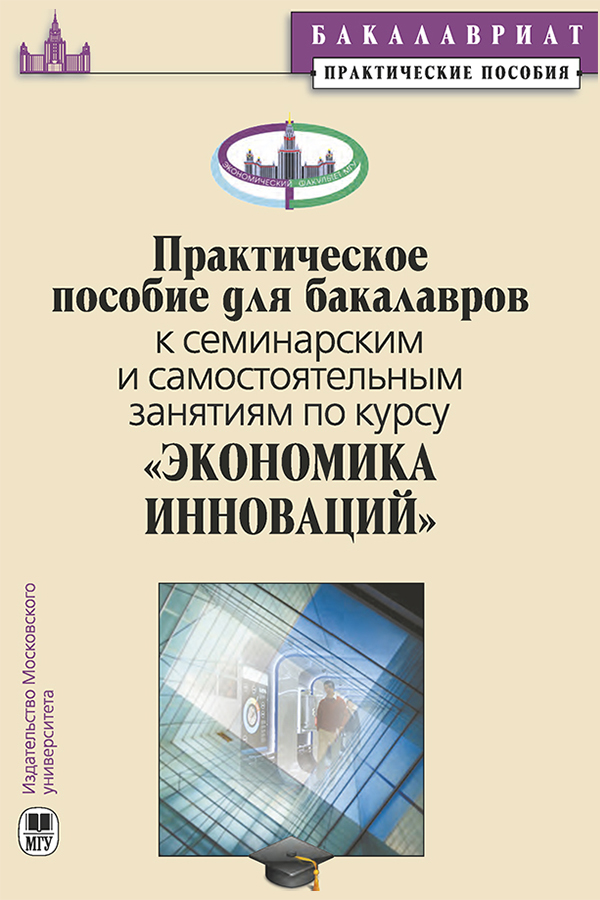 >Bachelor Students’ Practical Manual for Seminars and Independent Work Based on the Course of “Innovation Economics’
Ivashchenko N.P.;

The course of ‘Innovation Economics’ allows students to create a system of knowledge in the field of innovation economics both at the macro level (general characteristics of innovation, the innovation process theory, the innovative development concept) and at the micro level (key factors for innovation, setting up and building up an innovative company, choosing an innovation strategy). The practical guide is intended for Moscow State University students to be used for seminars and studies on one’s own in accordance with the training course ‘Innovation Economics’. 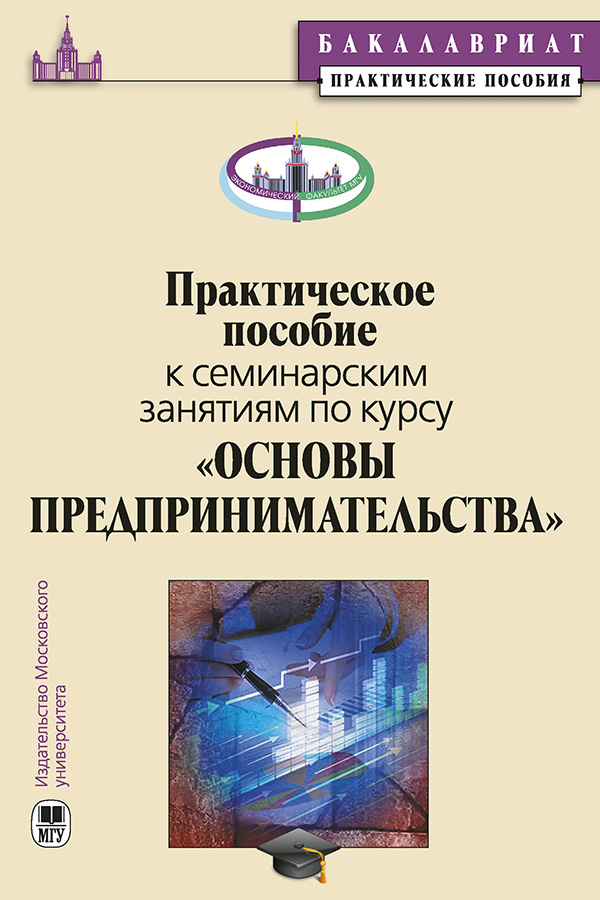 >Practical Manual for Seminars Based on the ‘Fundamentals of Entrepreneurship’ Course
Ivashchenko N.P.; 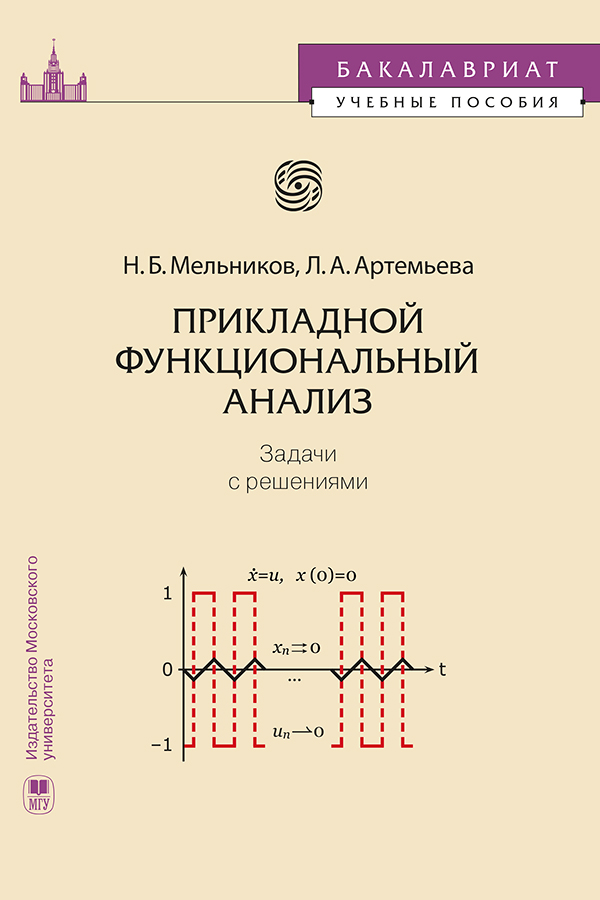 The book contains examples and problems that allow us to master the methods of functional analysis without using the theory of measure and the Lebesgue integral. The manual is aimed at students specializing in applied mathematics. The reader needs to have prior knowledge of the basics of mathematical analysis and linear algebra. 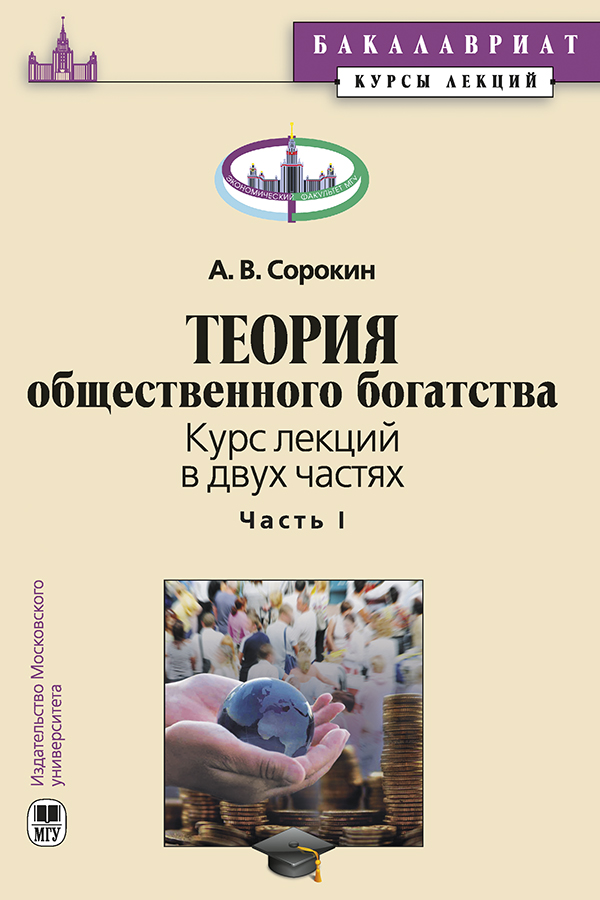 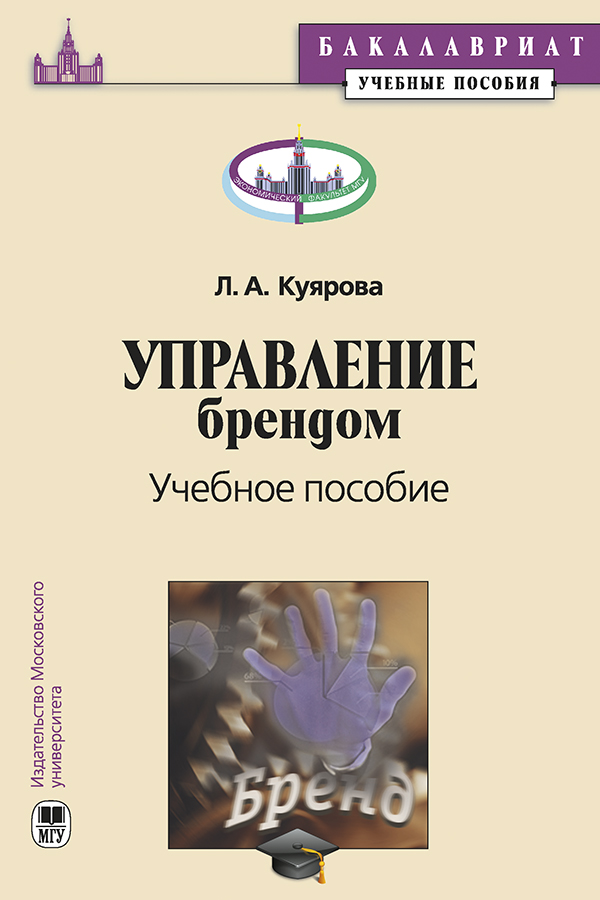