Moscow University Press has a really long history. This printing house is only one year younger than the Moscow State University itself. 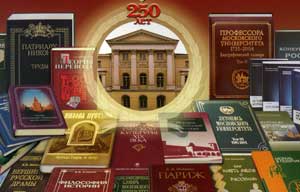 The own printing house appeared at the Moscow University a year after the university itself was founded. On April 25 (May 8, old style) of 1756, the official opening of the printing house and the bookshop took place at the quarters of Moscow University at Mokhovaya Street. The event was timed to the celebration of the coronation day of Empress Elizabeth Petrovna. At this historic moment, the development of the permanent Russian educational and scientific typography started.

In the first years, the printing house was managed by the first curator of Moscow University, Ivan Shuvalov, an outstanding person who devoted his life to the development of public education. Pretty soon, through the efforts of the Academy of Sciences, the Moscow University Press became a major center for printing.

In 1758, the Moscow University Press published the Collected Works of M.V. Lomonosov in two volumes. In the 18th and 19th centuries, the printing house was issuing books by V.N. Tatishchev, M.M. Kheraskova, A.A. Barsova, N.M. Karamzin, N.V. Gogol, K.A. Timiryazeva, V.O. Klyuchevsky, V.I. Vernadsky, N.F. Filatov, K.E. Tsiolkovsky, S.A. Chaplygin, A.G. Stoletov, L.N. Tolstoy. Moscow University Press ran such well-known journals as the “Bulletin of Europe”, “Countryman”, “Children's reading for the heart and mind”, “The Journal of Fine Arts” and others. It was MSU Press that brought to light for the first time the book of N.V. Gogol "The Adventures of Chichikov, or the Dead Souls" – this happened in 1842, and four years later MSU Press printed for the first time a separate edition of I.S. Turgenev.

From the very beginning Moscow University Press has been paying much attention to publishing of textbooks. In 1771, the first textbook on teaching methods at school – “The Method of Learning” – was published. It was composed by professors of Moscow University. Since than, the university has published tens of thousands of its own textbooks, both for universities and for general education schools. Today, a vivid example of this tradition is now existing series of books “Moscow University for School” and “Classical University Textbook”.

In 1949, MSU Press became an independent organization: the Charter of the publishing house was adopted, the typographic brand “Moscow University Press” was approved.

The famous book series launched in the second half of the 20th century are “University Library” (1970s), “The Great French Revolution. Documents and Studies "(1980s),"Theoretical Political Science: The World of Russia and Russia in the World ","Rereading The Classics", "Proceedings of the History Faculty","21st Century: Information and Society "(1990s) , “Classical University Textbook”, “University Lecture Courses”, “Thoughtful Reading School” (2000s).

In the 21st century, new series were launched: in conjunction with the faculties of Moscow State University MSU Press issued the literary series “Classics of the Genre”, a series on local history for public schools, a series on regional studies, and on its own – the series “MSU for children”.

Since 1988, under the agreement between the publishing house of Moscow University and Allerton Press, scientific journal series “Moscow University Bulletin” (English for “Vestnik Moskovskogo Universiteta”) have been translating into English. In the 1990s, MSU Press launched a program on publishing translated books on the most world relevant topics in economics, global studies, law, philosophy, and literature.